News flash: There are lots of ways to cook meat. But one of the most reliable techniques is roasting. Simply defined, roasting relies on hot air and a dry environment (no added liquid, keep meats uncovered) when cooking in the oven.

Roasting smaller cuts of meat is a friendly weeknight cooking method because it frees your hands and your stovetop to prepare other parts of the meal (or do something else altogether) while the meat cooks. And if you already have the oven cranked, it’s easy enough to throw another pan of vegetables into roast alongside the meat – or to prepare a sheet pan dinner that roasts ingredients all together in one pan.

Roasting larger cuts is more of a weekend or holiday project, because the bigger the meat, the longer it takes to cook. But even though roasting a big hunk of meat takes time, it’s all hands-off in the oven and can either feed a crowd or set you up with plenty of leftovers. We’ll guide you through some of the questions you might have about roasting and the different ways to roast cuts of meat. Some of the topics include:

Roasting refers to cooking something in the oven (usually at a pretty high temperature for at least part of the time) uncovered, without added liquid. Unlike searing meat in a skillet or on the grill, during roasting, the food is not in direct contact with the heat source. Between the high temperature and the airflow around the food, roasting facilitates browning and even cooking. When you think roasting, think hot air.

What’s the Difference Between Roasting and Baking? Baking and roasting both happen in the oven, but baking takes place at a lower temperature (usually 350°F to 375°F). Baked items are sometimes covered to keep the dish from drying out – think lasagna or other casseroles.

Hot Air Is the Name of the Game

High and dry heat accomplishes a couple of important things. The high temperature means the meat will cook relatively quickly if it’s a smaller cut; a high temp will brown meat nicely on the exterior. For larger cuts of meat, high temp at the beginning or end of cooking will encourage browning. If your cut of meat is skin-on, the hot air flowing through the oven will crisp the skin.

Depending on which cut of meat you’re cooking and what you want the outcome to be, roasting is a dependable method. Roasting a larger piece of meat, like a tri-tip or a sirloin roast, will feed a crowd or set you up for spin-off meals throughout the week. Roasting smaller cuts, like steaks, chicken pieces, or pork chops, gets the job done quickly for simple, fast weeknight cooking.

Roasts vs. Roasting: Let’s Break It Down 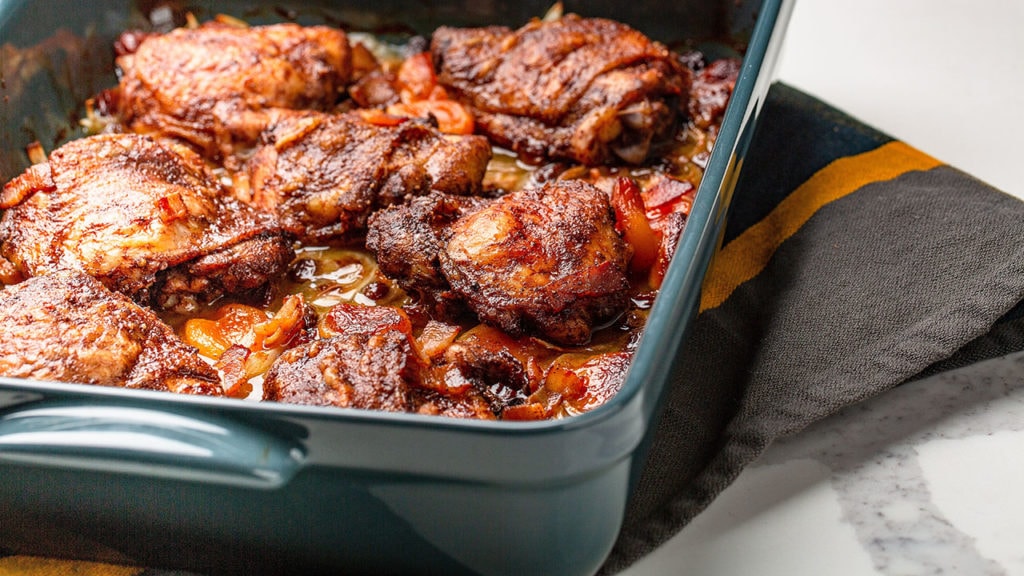 Meat nomenclature can be confusing, for real. Why do we call certain cuts roasts when we often braise those cuts? Why do we roast cuts that aren’t called roasts?

The cuts of meat that are called roasts have something in common: their size. Think about it: Stovetop cooking doesn’t work for big hunks of meat, so many of these are called roasts because that’s the traditional way they’ve been cooked. Here’s a primer we put together to guide you through some of the different roast cuts.

Of course, just because larger cuts are often called roasts, that doesn’t mean smaller pieces of meat can’t be roasted. You’ll typically have more success roasting pieces of meat that have plenty of fat to melt into and baste the meat; that are bone-in, giving the meat some internal temperature control as it cooks; and if applicable, that are skin-on, to protect the meat and also to turn deliciously crisp under the heat.

The Best Cuts of Meat for Roasting

Most cuts of meat do well when oven-roasted, you just need to keep an eye on the timing and the meat’s internal temperature. Any fat on the meat will melt off during cooking, helping to baste and add flavor to the piece of meat. Skin-on, bone-in cuts also perform well when roasted because the skin and bone help to protect the meat and keep it from drying out. Here’s a list of our favorite cuts for dry-heat roasting:

We love beef roasts of all kinds, from brisket to crown roast. Our basic recipe for roast beef would work with tri-tip, eye round, or top round. Here are some other delicious ways to prepare a big hunk of beef.

Tips for Roasting Meat to Perfection

Whatever cut of meat you decide to roast, there are some general rules that will help ensure delicious, juicy, perfectly cooked meat, every time you decide it’s time for a roast.

Take these steps to roasted perfection:

So, now that you have a sense of what’s possible with the technique of roasting, get ready to crank the oven and turn out some delicious dishes.

All About Pot Roasts

How to Roast Anything