Where would we be without capsicum? Fiery or warm, tingly or smoky, often fruity and a little bit sweet —the chili pepper genus is the botanical and culinary equivalent to a rock supergroup. Native to the Americas but found all over the world, cuisines globally would be nowhere near as exciting without the addition of peppers in some form.

Consider condiments like Yemeni zhoug or Turkish harissa that enliven anything from grilled meat to roasted vegetables; mouth-numbing jerk chicken from Jamaica; eye-wateringly spicy Thai soups; and the fresh chiles in a Mexican pico de gallo or the dried ones in a mole; stuffed chiles, pickled chiles, stewed chiles—you get the idea.

Peppers in the Wild

Chili (or chile/chilli, depending on where in the world you live) peppers originated in Central and South America—there’s evidence they were being gathered in the wild in Mexico as early as 6700 B.C., and were cultivated there before 3500 B.C. European explorers brought them along on their global travels and the plants spread accordingly (birds, who, unlike humans, don’t have the spicy capsaicin receptors in their mouths, also aided in spreading chilies), according to Heather Arndt Anderson, a botanist and author of Chillies: A Global History.

A few things to know about peppers:

Chili peppers in all forms are a natural companion to meat dishes—their heat can cut through the richness of a good ribeye, and their piquancy can bring a plain baked chicken breast to life. Keep reading for a guide to some of our favorite peppers and how to best put them to use in your kitchen.

You’re familiar with bell peppers, the sweet (read: No heat), crunchy peppers that are delicious served raw or sauteed with onions to accompany pork sausage. Technically a fruit, but used as a vegetable, bell peppers are excellent candidates for salads, sauteeing, or stuffing and baking. These squat, round sweet peppers are often seen pickled (and make a killer pizza topping in this form) or stuffed (olives are a popular stuffing for cherry peppers). When dried, cherry peppers—which are also called “piemento” peppers—are ground to powder to make paprika. These Japanese peppers are often served as bar snacks and while generally sweet and mild, the occasional spicy specimen can sneak up on you. Shishitos are best served roasted or sauteed and eaten whole, maybe alongside a grilled steak or chicken thigh. Native to Puebla, Mexico, and found throughout the country’s varied cuisine—including in its national dish, chiles en nogada—the shiny dark-green poblano shines in a multitude of dishes. It’s great for stuffing, or roasting whole and peeling. The resulting pepper flesh is tender and perfect for dicing into a relish, pureeing into a salsa, or adding to enchiladas or tamales. When dried, poblanos are known as ancho peppers, which are often used for sauces like mole, or ground into a not-too-hot chili powder. Another Mexican native named for the town of Jalapa in coastal Mexico, jalapenos are perhaps the most well-known chile in North America. While their heat can vary pod to pod, jalapenos typically rank toward the bottom of the Scoville scale, though they’re spicier than poblanos. Most often used fresh, diced into salsas; or pickled and used as a garnish in many dishes. Jalapenos are known as chipotle peppers once dried and smoked. In this form, they can be used in sauces and soups of all kinds. This Peruvian pepper is one of the ingredients in the country’s “holy trinity,” joining red onions and garlic as the trio used to build flavor in many Peruvian dishes. A fruity-hot pepper that starts yellow but matures to a bright orange color, aji amarillo is used in many dishes from Peru, like ceviche, and registers in the middle of the Scoville scale. Aji amarillo is also a great base ingredient in hot sauce. Also known as a Thai chile, these fiery little peppers are used throughout Southeast Asia, in Thai, Vietnamese, and Indonesian cuisine. They can form the base of chile paste, which is then used to flavor curries; or sliced fresh into salads for a powerful burst of heat. Bird’s eye peppers clock in at about 100,000 SHU’s on the Scoville scale, about 10 times hotter than your average jalapeno pepper. 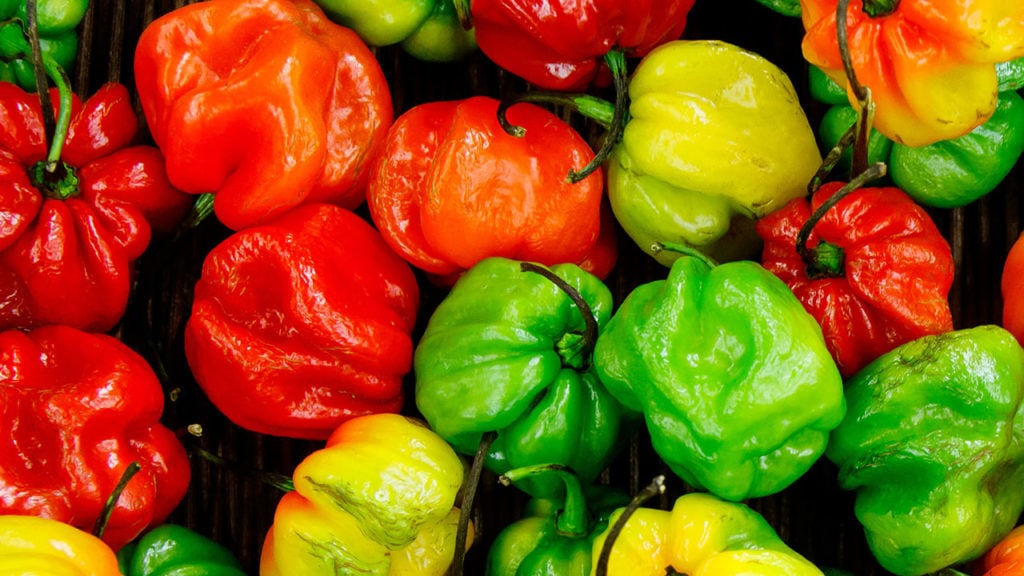 A relative to the habanero chili, Scotch bonnets are one of the spiciest peppers out there, registering between 100,000-350,000 SHU’s on the Scoville scale. Native to the Caribbean, these pretty little yellow-orange peppers are an important part of the regional cuisine there, integral in famous dishes like jerk chicken (or pork), and fruity hot sauces and salsas. Chile experts recommend wearing gloves when handling Scotch bonnet peppers to keep the volatile oils off your skin.