For years I toiled over how to cook chicken so that the meat was tender and had some of that delicious char that comes from roasting. After several failed attempts (high heat only, brown sugar only, broiler only), I finally had my lightbulb moment—miso.

During my time at Cook’s Illustrated, I learned a great deal about a small, but mighty mold called koji (Aspergillus oryzae). Along with being Japan’s national mold, koji “kickstarts the fermentation process” in ingredients such as soybeans, rice, and barley to then create the umami-rich ingredients we know as miso, sake, and mirin. My former colleague Dan Souza was right when he called koji a “game-changer.” In 2013, David Chang spoke about how koji produces umami at Harvard’s Cooking and Science lecture series: “Microbes produce enzymes, enzymes develop amino acids, glutamic acid + aspartic acid = umami, umami = delicious.”

Any ingredient containing koji will help tenderize meat, bring out more meaty flavor, and add more caramelization because of the sugars developed during fermentation. Cool!

Miso ended up being a game-changer for me in my mission for the perfect roasted chicken thighs. Thanks, koji. 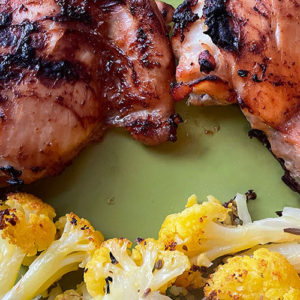 *Red miso is the most potent, and it will give you the best caramelization. I love Miso Master’s organic red miso.
Share on Pinterest!Pin at @Butcher_Box!