At ButcherBox, we are committed to delivering the highest quality, direct-to-consumer meat and we have developed a meat procurement and delivery ecosystem that is world-class.

We are also compelled to always keep innovating, and, if need be, to rewrite the rules to achieve the mission of being the most trusted purveyor of meat in America.

Part of that innovation involves searching the globe for the best meat for our customers, no matter where in the world it may originate.

Recently, we’ve observed one of America’s fast-food franchises making claims in their commercials that geographic proximity is a deciding factor in meat quality. Specifically, they imply that meat from Australia is inferior.

The problem is that this tactic ignores one major accepted difference between U.S. and Aussie meat: By nature, the Australian beef industry has major advantages over the American beef system.

For one, the vast majority of Australian cattle is grass-fed for its entire lifecycle. In the U.S., only about 2 to 4 percent of cattle are grass-fed and grass-finished, as we’ve pointed out before. This difference is due to the advantage of climate. Australian farmers have massive swaths of land for their cattle to graze making it possible for a larger number of cattle farms to operate in the country.

Even when cattle are considered grass-fed in this country, very few are actually raised purely on pasture; most are raised on a diet of grass and forage—which is often defined in very broad terms. Language and labeling can also be problematic for U.S. raised beef as meat referred to as being “pasture-raised” is oftentimes not exactly what is implied by the term.

At ButcherBox, we want to supply the best beef possible.

We’ve been to Australia and have been amazed by how vast some of the cattle ranches are. The continent in the South Pacific is far more than just surf breaks and Sydney. Most of the country is wide-open space that is more temperate for grass to grow. In the US, our outstanding farmers produce amazing grass-fed beef; however, the number of such purveyors is limited by geography, climate, and the availability of grazing lands.

Australian farmers don’t have the same limits. Literally, on one of our visits to an Australian farm, when we arrived, the rancher said, “Let’s go find the cows, I’m not sure where they are.” Where they were was roaming in open pastures miles away. 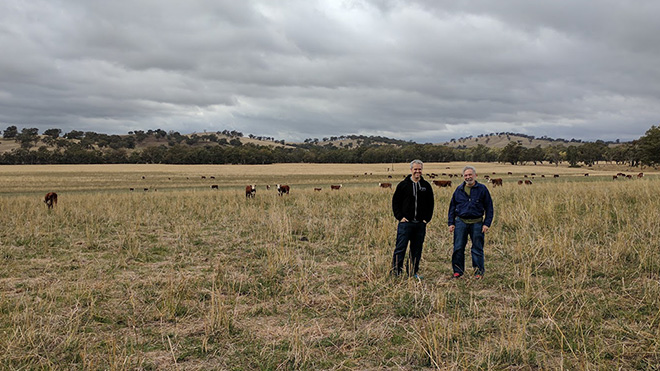 Mike Salguero (CEO) and Michael Billings (Head of Procurement) on a family-run farm in Australia.

We source beef from Australia because of this grassland advantage and, also, because the quality of their beef is exceptional. Grass-fed beef in Australia undergoes a stringent grading process factoring in attributes contributing to tenderness and flavor that are not considered in the U.S meat grading process.

We offer Australian grass-fed beef because it meets our benchmark of never ever having been given antibiotics and hormones. Australian beef is also raised with our environment and people’s health in mind.

Another difference between U.S. beef and its Australian meat is in the standards to which each is held. Our American farmers take it upon themselves to raise their cattle by the standards we deem important. In Australia, there is a wide-reaching system in place to do that. It’s called MSA or Meat Standards Australia.

MSA is a grading system developed by the country’s own red meat industry to improve the quality of beef and other meat. The reason is explained on the MSA website: “The system is based on almost 700,000 consumer taste tests by over 100,000 consumers from nine countries and takes into account all factors that affect eating quality from the paddock to the plate.”

MSA makes it simpler to buy and cook Australian beef as well as lamb. Meat certified by the MSA is graded for tenderness, juiciness, and flavor, and is also labeled with recommended cooking methods. No such system exists in the U.S.; in fact, there are a number of grading and certifying agencies that actually make it much more confusing to buy the best quality meat here at home.

There’s more to producing quality meat than just making sure it tastes great. At ButcherBox, we strongly maintain that those who raise cattle (or other livestock) should do so in an ethical manner. And the Australian meat industry believes this as well.

The country has a system in place called the Australian Livestock Processing Industry Animal Welfare Certification System or AAWCS.

AAWCS does independent certifications of meat processors across the country. These audits check to make sure that there is compliance with best-practice animal welfare standards for the entire meat industry. As the certifying organization states on its website, “Good animal welfare practice is a requirement of customers of the Australian meat and livestock industry both here in Australia and around the world.”

This is important to our members as well. We’ve already heard from a few ButcherBox members who find the Australian standards reassuring that they will be getting certified 100% grass-fed meat from livestock that was raised humanely.

If we didn’t believe this was the right thing for our members, the cattle, and our farmers (here and abroad), we wouldn’t be comfortable delivering our meat directly to our members’ doors.

So, while we won’t stop seeking out the highest-quality meat from farmers across the United States, we also want to make sure our customers have access to the best beef in the world. Whether that comes from Montana or Northern Australia, we strive to deliver the healthiest, most humanely-sourced meat we can find.