Obviously, we love a great steak as much as anyone.

And there is nothing we dislike more than when a simple mistake ruins a fantastic, tender steak.

So as a bit of public service, we want to make sure that you are aware of one of the most common ways people may unknowingly ruin a beautiful cut of meat—an error that can easily transform a melt-in-your-mouth steak into something akin to chewing a rubber boot.

And that is cutting it wrong.

Once you cook your steak to your preferred level of doneness—although we don’t know why anyone would eat a steak cooked anything but medium-rare —you should first let the steak rest for it to maintain a perfect tenderness and its juices.

After it is rested—and we know you’ve been anxiously waiting to dig into the amazing looking steak sitting on your cutting board—you need to be tactical so you don’t screw up your steak.

You need to slice it the right way.

With any steak cut, you should always slice against the grain, which means against the direction that the muscle fibers run.

This is true of all different cuts of meats. You will be able to tell the difference in flavor and tenderness if you cut a T-bone steak, a New York strip steak, or any other well-known cuts of beef, with the grain as opposed to against the direction of the muscle fibers.

But it is most vital to slice against the grain with some of the more unique and harder to find cuts of beef (Many of which we include with our monthly ButcherBox subscription, like delicious flank steak and tri-tip steak).

Cuts like skirt steak and hanger steak have more pronounced long muscle fibers (the grain of the meat) because they come from parts of the cattle where the muscles work harder. By nature, they are tougher cuts. Often, these tough cuts—flank steak, skirt steak, and hanger steak, in particular—benefit from marinating before grilling or cooking.

Why do you need to slice against the grain so you don’t ruin a perfect steak?

“It is muscle, and muscle consists of fiber and connective tissue,” says ButcherBox Chef Yankel Polak. “Depending on where the cut is harvested, the muscle may be tougher with more connective tissue or tender with very little.

“Cuts from the loin and rib—such as New York strip, sirloin steaks, filet mignon, or ribeye steaks—are quite tender because those are less used muscle groups. Cuts from the chuck, round, and flank tend to be tougher with more tissue due to their high usage.”

The more the muscle is used according to Chef Yankel, the more apparent the grain becomes, even with raw meat before cooking. “With tender cuts of steak, like the filet mignon or strip steak, it really doesn’t matter how you cut it, it will pretty much be tender no matter what,” he says. “However, a steak with a distinct grain will be inedible unless cut against the direction the grain runs.”

If you do cut with the grain of the steak, you will often find the meat more gamey and tougher to chew. The reason? It is because the long muscle fibers remain intact and haven’t been cut. Cutting against the grain breaks up the muscle fibers making the steak much more tender.

This is even more true with grass-fed beef because of the muscle formation of cattle and how the cooking process is a bit different.

“Grass-fed, grass-finished cuts beef will be significantly less forgiving to an improper cut,” says Chef Yankel. “It’s leaner, to begin with, and the cows have lived more active lives. Their muscles will be more developed than grain-fed cows who spend a significant portion of their lives cooped up in a feedlot,” he added.

That’s why it is essential for you to slice against the grain and why most restaurants cut their flank steaks, hanger steaks, and skirt steaks before delivering them to your table.

Not only is cutting against the grain crucial, but the thickness of the slice is important as well.  “Considering that the muscle fibers run parallel to each other,” says Chef Yankel, “cutting thick slices against the grain still leaves a significant amount of tough muscle to chew through.”

“Keep the slices thin,” he adds, “as thin as possible.” 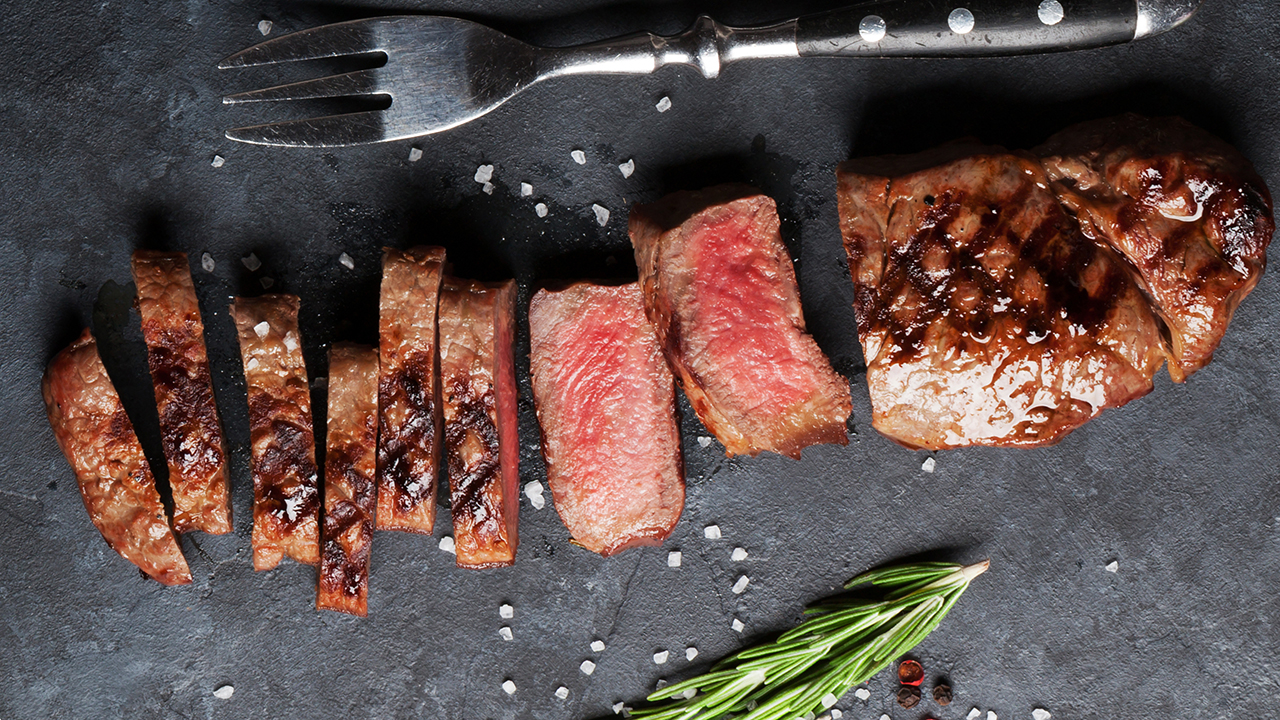 A Sharp Knife is a Vital Tool

Lastly, consider the knife you use.

While most steak knives are serrated, the best knife for a steak is actually a flat blade, a chef’s knife, or slicer. “At least double the length of the width of the surface area of the meat,” is chef Yankel’s rule.

“This will allow you a smooth motion while slicing,” he says. “Don’t press down hard or struggle with the meat. Using a sharp knife, draw the blade smoothly across the surface. Allow the knife to do the work; slicing against the grain should not be hard work.”

“A clean-cut retains all the moisture that is reabsorbed during the resting period,” Chef Yankel says.

Just to review our rules for enjoying both popular cuts and harder to find steaks: Always rest your steak for ten minutes or more, use a very sharp knife, and cut THIN, against the grain.

Think this is nonsense?

Cook’s Illustrated recently discovered that even steaks that many people consider to be tough cuts were actually as tender as the traditionally better known and more widely considered tender cuts if cut the correct way. You can watch a video of the experiment and its results here.

Our taste buds and science concur: Cut your steak against the grain and you will have a mouth-watering, tender steak every time.

Oh, and whatever you do, don’t cook it medium-well. But that’s another topic altogether.