Do you often smoke meats, or have you wanted to try smoking one of your favorite cuts of beef? There are few things as delicious as what happens when you pair beef, smoke, wood, and fire.

Today, we’ve broken down the nine best cuts of beef for smoking. Beef, after all, is the ultimate meat for smoking adventures. With so many cuts, it’s ever-versatile, and you can achieve unique flavors and textures with each one.

We’ll offer a quick primer on each cut, along with estimated cook times so you can make plans for your smoker, the best wood chip flavor pairings, and target internal temperatures you’ll want to hit for moist and juicy beef. Keep reading for more. There’s a reason why brisket is one of the all-around best cuts of meat for flavor.

Beef brisket is the holy grail of Texas barbecue, and you’ll find this top-tier cut in smokers all over the country. The reason for its popularity is because it has a rich, mouthwatering flavor and turns fall-apart tender when smoked low and slow.

The brisket comes from the lower front of the animal, near its front legs. It’s the animal’s breast and, therefore, one of the most used muscle sections. All that work makes for an ideal cut to smoke for an extended period of time, breaking down those tough fibers. Brisket also features a healthy top layer of fat, tenderizing the meat as it cooks. A smoker is a great way to cook beef ribs and other cuts of beef.

You might be used to pork ribs, but big, hearty beef ribs are the way to go when it comes to the smoker. They become juicy and tender when given the low and slow smoked treatment.

Beef ribs come in several forms. Most common are the well-marbled bone-in ribs, cut from the fatty region between the brisket and flank steak. You can also smoke country-style beef ribs, which are meaty, boneless ribs made by splitting a chuck eye steak in half.

Or, try beef short ribs in the smoker. These ribs come from the beef chuck portion of the animal. Too small to be used as steaks, they’re a total of five short ribs cut from this region, and they’re perfect for cooking low and slow in a smoker. Tri-tip is a popular beef cut for a lot of recipes.

You might be familiar with the Santa Maria-style of tri-tip roast if you’re from the West Coast. If not, it’s a bit of a newcomer on the national scene. The tri-tip is the triangular-shaped muscle found at the bottom tip of the sirloin. It’s a mild, juicy roast that’s perfect on the smoker.

Tri-tip is very lean and smaller than other large cuts of beef on this list. For that reason, you don’t need all day to smoke tri-tip to woodsy, beefy perfection.

Cut from the beef shoulder, chuck roast is a cut of beef especially amenable to low and slow cooking preparations. For that reason, it’s delicious on the smoker. Plus, when you order a chuck roast from ButcherBox, you’ll enjoy a robust grass-fed, grass-finished beef flavor that’s lean and unbelievably delicious.

Like brisket, chuck roast comes with a lot of tough fibers and connective tissues that break down over time. Add a rich smoke flavor to that, and you’re in for one delicious meal.

Did you know you can smoke individual steaks, too? Top sirloin is a lean steak that doesn’t require too much time on the smoker to turn out juicy and delicious. It boasts the rich flavor profile of a roast with the texture of a steak.

Cut from the hip area on the animal, close to the round primal, top sirloin is extremely versatile. It’s ideal when marinated before taking a trip to the smoker.

Flank steak is a great beef cut choice for grilling and smoking.

A large, flat cut taken from the flavorful flank primal, flank steak is a great choice for the smoker because it will feed a crowd. You can marinate it or rub it down with a delicious spice rub before sending it off the smoker.

Flank steak features a lot of muscle fibers, which break down during the low and slow cook time on the smoker. It’s lean and beefy and responds well to strong wood chips like hickory and mesquite.

A beef top round is a lean roast cut from the round primal; it’s also known as a “London broil” thanks to a popular preparation of the cut that involves marinating and broiling it quickly in the oven.

The top round is the most flavorful of all the round steaks and takes well to a low and slow preparation in the smoker. Still, you might want to take a few extra steps to get the best texture and flavor from your smoked top round. We’d go for a dry brine, which involves coating the top round in kosher salt and refrigerating it, uncovered, overnight. This helps the roast retain some of its natural moisture while smoking. 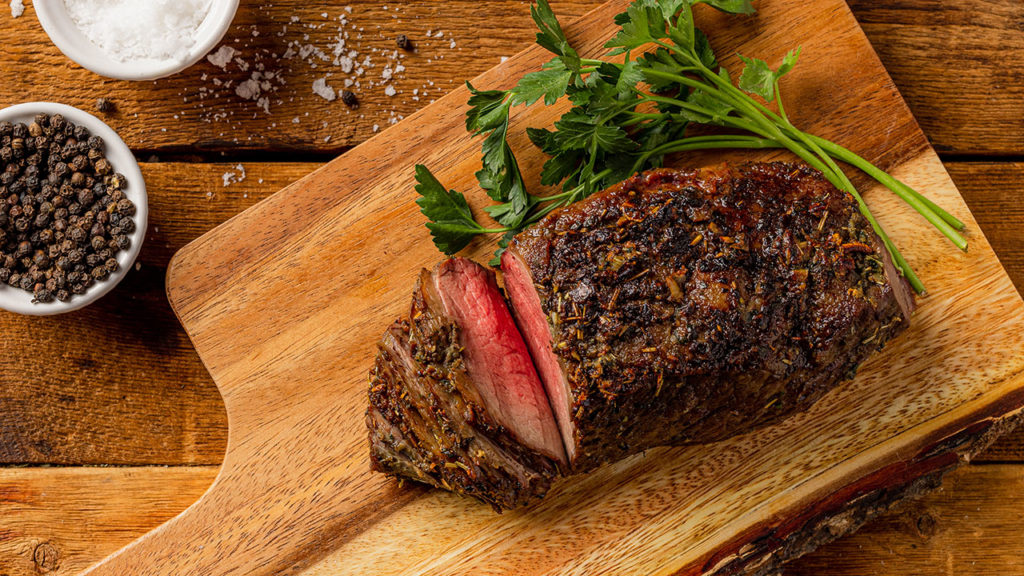 While it may sound fancy, a coulotte or top sirloin roast is one of the best cuts of beef for its tenderness.

If you’re not familiar with a coulotte roast or top sirloin roast, you’re in for a treat. This tender cut, also known as Brazilian picanha, is a large, boneless cut from the top of the sirloin cap.

There’s a small layer of fat attached to the top of the coulotte, which keeps the roast moist and flavorful as it smokes. We think it’s perfect when rubbed down with a smoky rub and then smoked low and slow. As a smaller roast, it doesn’t need very long to achieve delicious results.

As we mentioned before, you can absolutely smoke individual steaks. So you may as well give the smoky treatment to the king of steaks, the ribeye. The rich marbling in a ribeye turns out unctuous and succulent after a trip to the smoker.

This juicy cut is found in the center of the rib section of the animal, with a smooth, rich texture. Their perfect fat content is what makes them reign supreme. As a small cut, you can expect these to cook up relatively quickly on the smoker.

Do you feel inspired to get out and turn the smoker on? We hope so! There are so many cuts of beef to grace your smoker, we hope you give them a try.

Check out more beef blogs and recipes on the JustCook blog.