A hidden delight of being a ButcherBox member is the monthly unpacking. Just check out one of the hundreds of videos people have posted online discovering the cuts included in each month’s shipment.

One of the reasons the unboxing can be so exciting is because we include unique, difficult to find, and often under-appreciated cuts of beef, pork, and chicken in our monthly curated boxes.

Some months, members come across a slab of beef that is completely unknown. Take top sirloin cap, or coulotte as it is also known, for example.

Coulotte is a lean steak that comes from this hindquarter section of the cattle, specifically between the loin and the round. Often a couple of inches thick, it is usually identified by the thin layer of fat that covers one side. The fat layer gives the cut much of its flavoring as there is little marbling inherent in coulotte.

Coulotte is a bit unusual due to naming variations across cultures. The cut can be referred to as picanha, fat cap, rump cap, or top sirloin cap by North American butchers, which may be a reason for its lack of widespread use. At ButcherBox, we once only referred to it as coulotte, but now we use top sirloin cap.

A Cut of Beef with Different Names Across the Globe

The name ‘coulotte’ itself has a bit of a complicated backstory. There is some confusion over the derivation of the word from the original French. Some believe the word is closest related to ‘culot,’ meaning cap, a reference to the location and thin layer of fat of the top sirloin cut. However, there is also a belief that the name coulotte is derived from the French word ‘cul,’ meaning bottom or, to the dirtier-minded, is slang for the human derriere.  This interpretation is taken from the French word’s relation to the Latin word ‘culus,’ meaning bottom, and refers to the location of the muscle in the cow’s hindquarters or backside.

To complicate matters further, another cut, the ribeye cap, which is very different steak altogether, is known in France as the ‘calotte,’ a name also related to the cap-like nature of that cut.

Most people are first introduced to the top sirloin cap by its Brazilian name, picanha, which is the specialty of churrascarias—Brazilian steakhouses that grill and slice the steak off a skewer. Churrascarias derive their name from the term churrasco, which is Portuguese for barbecue.

“Picanha, or coulotte, is hugely popular in Brazilian BBQ,” ButcherBox’s Chef Yankel Polak says. “It is a perfect cut to grill.”

One thing is clear, when dry-seasoned and cooked carefully—do not overcook—the coulotte is a delicious steak. The cut is fantastic when cooked on a grill, but it is also has a lot of other uses, including for kabobs, steak sandwiches, stews, stir fry, shredded Mexican-style beef, and more.

In the summer, you can grill coulotte on skewers, Brazilian churrasco-style, over a wood fire or on a charcoal grill. When grilling the steaks outdoors, first score the fat cap, cut into smaller steaks—against the grain—and then season generously with kosher salt or rock salt and fold and skewer. You can also cook directly on a grill; to do that right, first cook with the fat cap down for a few minutes.

Either way, whether you are in New York or California, grilled coulotte will make you feel like you are in Rio de Janeiro in the summer.

“It’s crazy tender with a beautiful fat cap that just melts and crisps as you cook it,” he added. “Sliced thin and against the grain, this hunk of sirloin will literally melt in your mouth when treated properly, which is medium-rare or skewered and slow-roasted over an open fire.”

Check out our “Mole-Rubbed Coulotte with Tomatillo Salsa” recipe below. 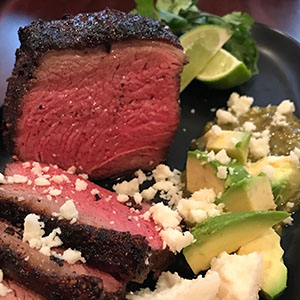