Early last month, on a surprisingly mild October evening outside of Boston, ButcherBox held a farm dinner for some of its most loyal Boston-area customers. The food and conversation were both fantastic. But what was most impressive was everything that went on behind the scenes.

One secret we’d love to share is how we pulled it off; or, to be more specific, how the team, led by our Head Chef, Yankel Polak, made what seemed like a challenging endeavor both seamless and enchanting.

The degree of difficulty was a bit higher than your typical run-of-the-mill “cook for a crowd” event due to the locale: A pristine, New England farm in Lincoln, about twenty minutes from downtown Boston.

In addition to setting up the tables, lighting, and other decór, a makeshift kitchen had to be outfitted, and everyone working the event needed to know their roles and fill them out as if they were in a top restaurant in the city.

Creating a Menu for an Outdoor Dinner Event

First, the menu had to be created, and, as Chef Yankel has mentioned before about menu creation, “The food was sort of a conglomeration of who I am, paired with the needs of the event.” In addition to featuring some of the Chef’s favorite ButcherBox cuts of meat, there were also two menu items that included meat from Matlock Farms, the small family farm that hosted the event.

As he further explained the process, the chef said that after reexamining the menu, he often “makes adjustments to prep, to ingredients, to style, and design until the whole scenario feels right.”

“Then the real planning begins.”

According to Chef Yankel, once set, the menu drives the event. “From the menu, I hire my crew and draw up the equipment rental needs, which includes everything from industrial ovens and outdoor sinks right down to the butter knives we’ll use.”

“From there, I decide which type of dishes the food will be plated on and served in, as well as the garnishes and other decorations we will use.”

How to Create a Timeline for an Event Dinner One other key is that Chef Yankel then writes up an event timeline and assigns everyone their roles well in advance so it’s easy for all involved to know exactly what is being asked of them and they can ask about the specifics of their roles before the intensity of the event day arrives.

The real work begins on Monday of the week for a Thursday event. Yankel does a final check through of all lists: makes sure staff notes get sent out; double checks the guest list; checks the weather for the night of the event; gets the equipment rental quote finalized; gets the shopping, prep, and tools lists finalized; confirms the meat orders; and then, Yankel gets his home kitchen reconfigured for catering.

“At this point, my apartment begins to resemble an industrial kitchen,” Chef Yankel said.

The next day is a lot of preparation and running around. Coolers and ice need to be picked up, as well as the wines and meat. “The order got mixed up, so I had to do a last-second menu change while at the meat facility,” Yankel said. A final check-through of all lists is done and contingency plans are put in place in case of rain or staff failures.

Last on the list for Tuesday is another key to the event: The U-Haul trailer that will be used to transport everything to and from Lincoln is picked up.

The day before the event is even more hectic. Shopping begins at 6:00 AM, for the 150 or so ingredients needed. Around 11:00 AM, everything is brought back to Yankel’s apartment which, at this point, is packed with more food than a local grocery store.

Preparation begins immediately, Yankel said, and continues nonstop until 11 PM, at which point, the coolers are repacked with ice, the prep list is rewritten and triple checked, and the tools and equipment are packed in the truck. The apartment is left smelling like a restaurant kitchen.

How to Execute a Large Dinner – Day of the Event

The day of the event is both a marathon and a sprint. At 7 AM,  everything is packed on the ice again and loaded into the U-Haul.

At 9:30 AM, with his apartment looking like it just held “a frat party,” Yankel heads out to the farm.

Once on location, Yankel meets the equipment rental guys, who showed up with an unorganized truck full of rentals for four different parties. After pulling the 100 pieces needed for the event off the truck, it all needs to be expertly organized.

Next, members of the ButcherBox team arrive to prepare the site, rigging lights and setting up the event space, which, in this case, is a small grass grove, next to a field of roaming cattle.

By noon, the kitchen support staff arrives and gets a quick overview of the remaining preparation. Everyone then gets right to work finishing the food.

“I spend the rest of the afternoon setting up tables and chairs and fire pits, hauling hay, getting people into positions, putting out place settings, mixing salad ingredients, putting out appetizers, and cooking meat,” Yankel said.

Guests start arriving around 4:30. They have wine and beer sitting by firepits, while appetizers are served. Around 6:00 PM, everyone sits down to dinner, and by a little after 8:00, the event ends.

“Then the party begins, and, in a blur, everything goes smoothly, and we are done,” Chef Yankel said.

It got dark quickly, which made cleaning up and taking down the kitchen difficult. “I definitely did not plan enough light for the kitchen,” Yankel said. But even with that, everyone is home by 11 PM.

The night was a success by any measure.

Friday morning, the team headed back out for follow-up. Yankel checks in with farm to make sure rentals are all picked up and that the location is cleaned properly.

All of the chef’s personal equipment is put back into storage, tools get rewashed and put away, the U-Haul is returned, and then, according to Chef Yankel, “The apartment begins to look like home again.” 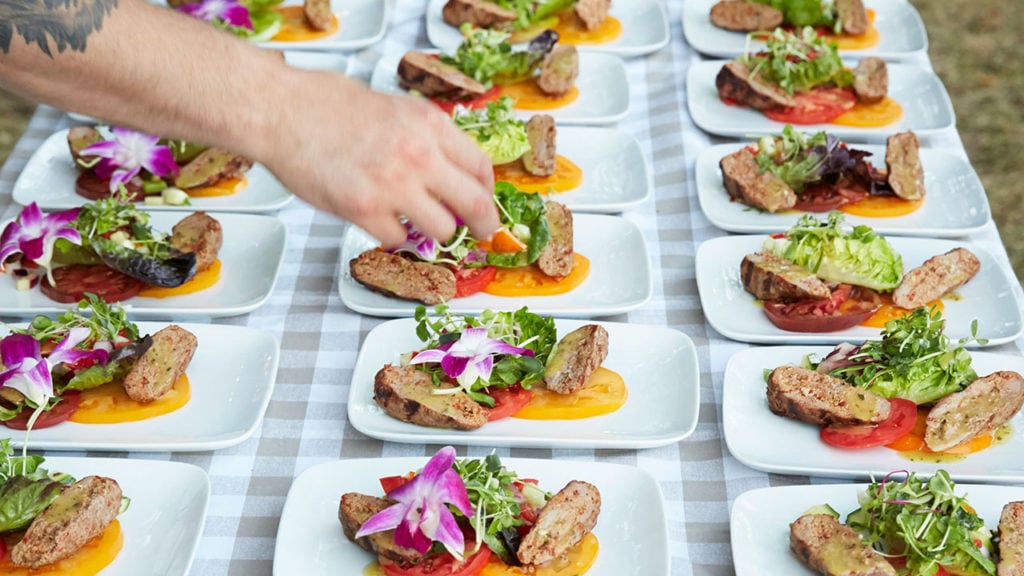 Here is the entire menu from the fall farm dinner: