Whether at the local watering hole in Virginia, an aprés ski bar in Colorado, a BBQ joint in Texas, or a high-end Manhattan roof deck restaurant, you are likely to find a common menu item with great regularity across these very different dining atmospheres: Crispy wings or baked chicken wings.

These well-known, well-loved savory treats are also a staple dish for sports celebrations, family get-togethers, and more — but how did they become so popular?

The history of chicken wings — and Buffalo wings, in particular — begins, like many tales of culinary success, with a period of neglect.

The Rise of the Chicken Wing

For most of the twentieth century, chickens were sold whole, that is when they were sold at all. Chicken, you see was not nearly as popular a source of protein as it is today. Not only was chicken not as readily available as it is today, but it was not nearly as convenient as steak or pork. From the early 1900s to today, the amount of chicken consumed by the average American has increased six-fold.

The increase in chicken’s popularity can be attributed to two developments in the mid-to-late twentieth century. The first was the explosion of commercial chicken farming operations. This led to greater availability of chicken for more people across the country as well as innovations in packing, chicken farming, and marketing. The latter created new “cuts” of chicken including boneless skinless chicken breasts and chicken “tenders.”

As the chicken industry was growing, the pork and meat industries were beginning to struggle for the first time, leading consumers to flock to chicken.

Because of how quick and easy it is to cook chicken breasts — versus the whole chicken — a massive surplus in chicken wings and drumsticks ended up being sold to restaurants and bars. One of the most important events in the history of the chicken wing occurred at the Anchor Bar in Buffalo, New York.

Fried chicken wings were a standard dish in some parts of the country, but they were never as popular as the spicy chicken wings created by the Bellissimo family, owners of the Anchor Bar, in the 1960s. According to lore, Teressa Bellissimo, the matriarch of the family is responsible for the creation of the hot wings, which, as they are commonly prepared today, were split into two pieces, cooked, and then smothered in a spicy sauce combining red pepper, butter, and hot sauce.

However, the actual invention of what are today known as Buffalo wings by Mrs. Bellissimo was contested by her husband, Frank, and his son Dom. Frank claimed that his wife came up with the dish late one night when the bar had accidentally ordered too many chicken wings. Dom, their son, told folks that the idea of the original Buffalo wings arrived in a fit of inspiration when Dom and his friends were seeking a late-night snack from Mrs. Bellissimo.

Today, there are more and more variations and tasty interpretations of Buffalo chicken wings than the Bellissimos could have ever imagined.

One of our favorite, easy-baked chicken wing recipes — a delicious Chef Yankel creation — is below. Make it a real crowd pleaser with Chef Yankel’s dip, blue cheese, or ranch dressing. 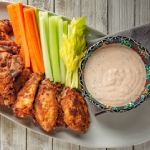