Looking for a convenient way to make bacon last? Store cooked bacon in the freezer!

It’s pretty well-established that you can freeze whole packs of sealed bacon, but what about cooked bacon? It turns out it’s fairly simple to cook and freeze your bacon for kitchen adventures to come.

However you use bacon, you’ll love ButcherBox’s succulent bacon, uncured and free from nitrates or nitrites, sugar, and other undesirable ingredients. 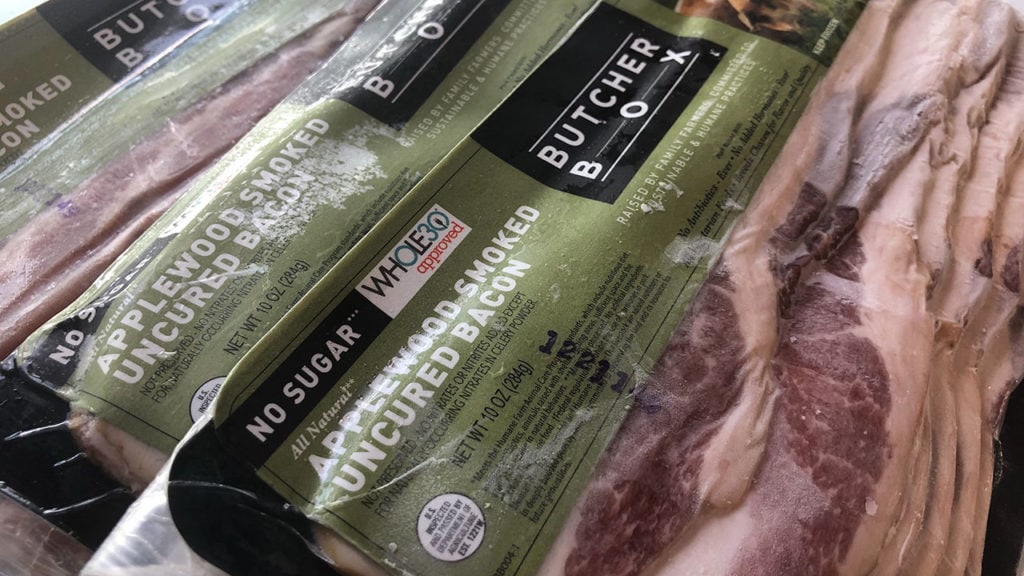 You want to ensure you get the bacon into the freezer or fridge reasonably fast after cooking it. This is because bacteria can grow rapidly at room temperature, so if your cooked bacon has sat out for longer than two hours, it’s best to toss it.

Use heavy-duty, zip-top freezer bags to keep your cooked bacon fresh in the freezer. It’ll keep for many months, but it’s probably at its best if used within three months.

Thawed, cooked bacon that was frozen will keep in the fridge for several days. Always check your frozen foods, though – any bacon that smells off or has a slimy texture is not worth cooking with.

How to Freeze Cooked Bacon

1. Batch Cook the Bacon by Baking It

To start, you’ll have to cook your bacon, of course. While pan-frying bacon is the best approach for small batches, you’ll want to consider baking bacon if you’re looking to build a big freezer stash.

To bake a whole pack of bacon, preheat your oven to 400°F and line a large sheet pan with foil. If you’d like extra crispy bacon, place a wire cooling rack atop the sheet pan. If you don’t have one, no worries. The bacon will still be delicious.

Lay the bacon piece by piece on the pan or rack, being careful to not let them touch, lest they stick together. For obvious reasons, this means keeping the bacon in a single layer. Bake the bacon for anywhere from 15 to 30 minutes, as real oven temperatures may vary and some people like their bacon to have some chew, while others want it crisp as a cracker. Start checking for your preferred doneness at 15 minutes, though.

2. Flash-Freeze the Bacon With Wax Paper

Now comes time for freezing your cooked bacon. Line another sheet pan with wax paper, then lay your cooked bacon out piece by piece, keeping them from touching once again. If you made a few batches of bacon, feel free to top each layer with more wax paper and bacon until all the bacon has been accounted for.

Cover all your bacon with a final layer of wax paper. Freeze for at least two hours, up to overnight. 3. Bag It In a Freezer Bag and Put It In The Freezer

Transfer all your frozen cooked bacon to a zip-top freezer bag, confident that they won’t stick together thanks to your prior freeze. It’ll keep for four to six months.

How to Cook with Frozen Bacon

Whether your bacon was cooked or raw before freezing, there are a few tricks to ensuring it turns out as crispy and succulent and fresh bacon.

If your frozen bacon is already cooked, simply allow it to thaw in the fridge overnight and warm it gently in whatever recipe you’re cooking up, or microwave it from frozen for 30 seconds. It’s an easy grab-and-go breakfast or perfect for crumbling atop dishes to give them a little oomph.

Use frozen bacon in any of these recipes:

With these bacon freezing tools and tricks, there’s no excuse for not keeping your freezer well-stashed with quality bacon – like ButcherBox’s uncured, sugar-free bacon sourced from heritage breed pork – at all times.