Across the globe, there are many types of bacon.

The differences between them being the way they’re prepared, cured, or cut. And no, Kevin Bacon is not a type you’ll find on this list.

Whether you are going out to brunch with friends, making a Saturday morning breakfast for the family, grilling burgers, enjoying a pizza, or even watching Footloose, guess what? There is far more potential for which bacon you involve than you’ve probably ever imagined.

Bacon Types Across the World 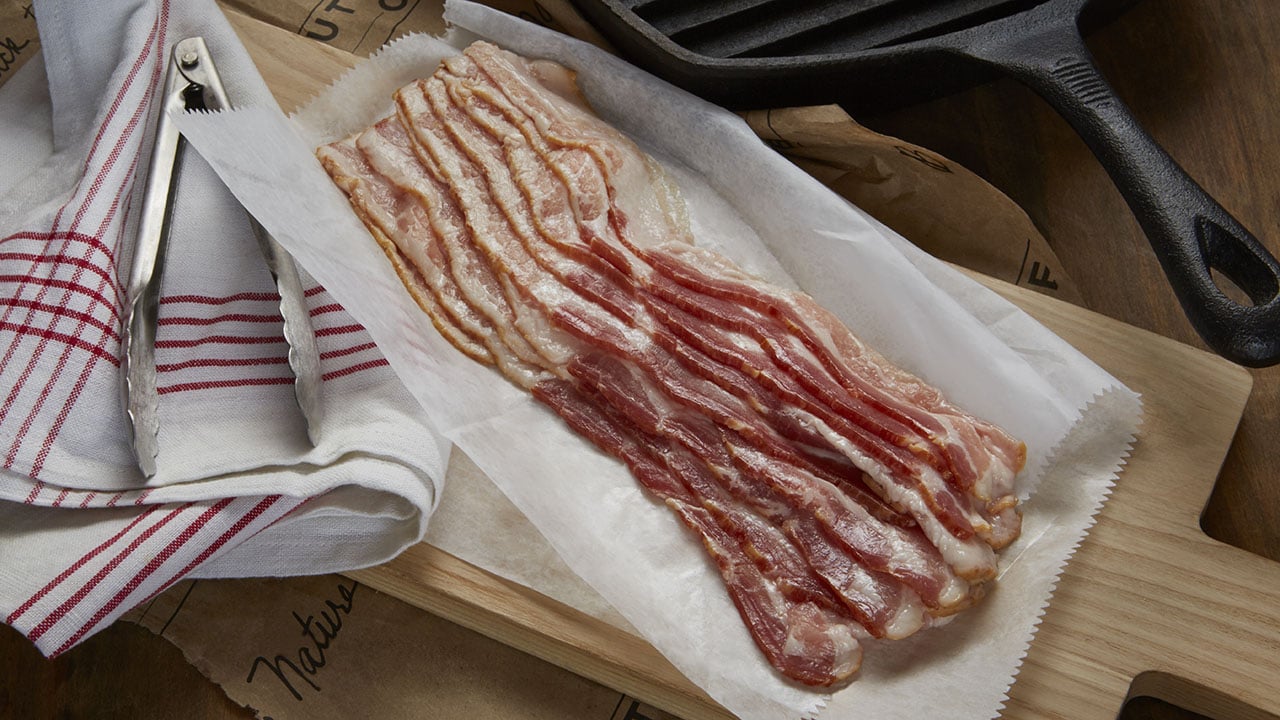 One of the most popular styles of bacon, American bacon is cut from the pork belly. It also has known aliases such as streaky bacon or side bacon. You are sure to find this long fatty cut style of crispy bacon sizzling in its salty grease in any given household on Saturday mornings and, once plated, surrounded by eggs, toast, pancakes, and coffee. Believe it or not, our neighbors to the north don’t call it Canadian bacon. They call it back bacon, and in some parts, they roll their pork loins in cornmeal or crushed peas and call it peameal bacon. Either way, they are all flavorful. So, next time you are in Canada, order Canadian bacon or just bacon and see what you get!

In the U.S., Canadian Bacon is just a distinctive form of pork loin, and no, it’s not ham but tastes similar because it’s from the same part of the pig. 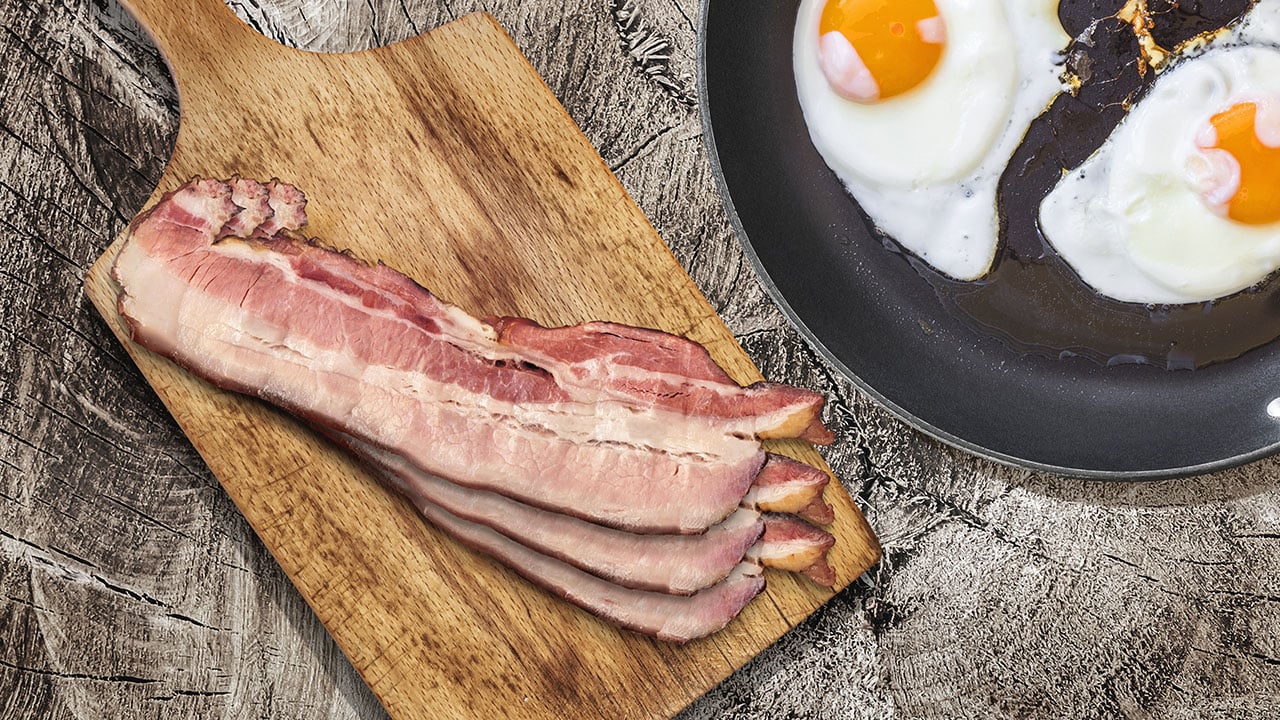 Like its Canadian and Irish counterparts, rashers are cut from the loin. A leaner, meatier, and less fatty option than American bacon, it is cut from the pork belly. It is a centerpiece in your typical English breakfast, along with grilled mushrooms, beans, grilled tomatoes, eggs, and buttered toast. Don’t confuse rashers with bangers, which are the British Isles’ version of breakfast sausage. Irish bacon gets cured the same as Canadian bacon or back bacon (the name comes from the source on the pig). The main differences are that Irish bacon is a circular shape and its rich fat content gives it that savory flavor.  It’s not cooked to a crisp—like some American’s prefer their bacon—and is often found in your Irish breakfast with eggs. If you’re in Ireland, it’s just breakfast.

Unless it is lunchtime when the Irish will also have it with rice or potatoes.

This Italian bacon is made from pig cheeks which can be a challenge to find—even at your local specialty grocer. With different seasoning flavors and an extensive drying process that locks in the delightful and rich flavor, guanciale is featured in many Italian pasta dishes.

Chinese cured pork belly (Chinese bacon) varies on the preservation and marinating process in different regions in China. The winter wind plays a crucial role in drying the meat and giving its authentic taste. Korean (Samgyeopsal) bacon, fatty pork belly cut in thick layered slices, is cooked and enjoyed over an open grill.

Russian bacon (Salo) consists of all fat and almost no meat. It is usually aged, sometimes for over a year. Dried and salted, it is often enjoyed as a bar snack; prepared, it’s featured in many traditional Russian dishes. This incredibly mouth-watering, thin Italian-style bacon is from the pork belly and often consumed raw. Even after being smoked or cured, it is often enhanced with salts or flavors of the diner’s choosing. Pancetta is great with sandwiches, but is also often chopped up and thrown in pasta—like carbonara—for some punchy flavor.

You are probably used to seeing bacon sliced up into streaks, but slab bacon is pork belly bacon in its most natural form—big slabs or chunks of bacon with or without a rind, all cured in different ways—smoked, salted, or aged. Whether you are making a soup, stew, or just regular streaky bacon, this form gives you a lot of tasty options in your meal preparation.

If you’re confused a bit about the difference between pork belly and bacon, check out our breakdown: “Bacon vs. Pork Belly – What’s the Difference.”

This version of bacon is extremely tasty with a very specific savor. Popular in Hungary, gypsy bacon is smoke-cured bacon with the rind on it.  Although it’s cured, be sure to cook it up over an open flame with the rind on to release all the secrets it has to offer. This delicious offering could quickly become one of your new favorite kinds of bacon. 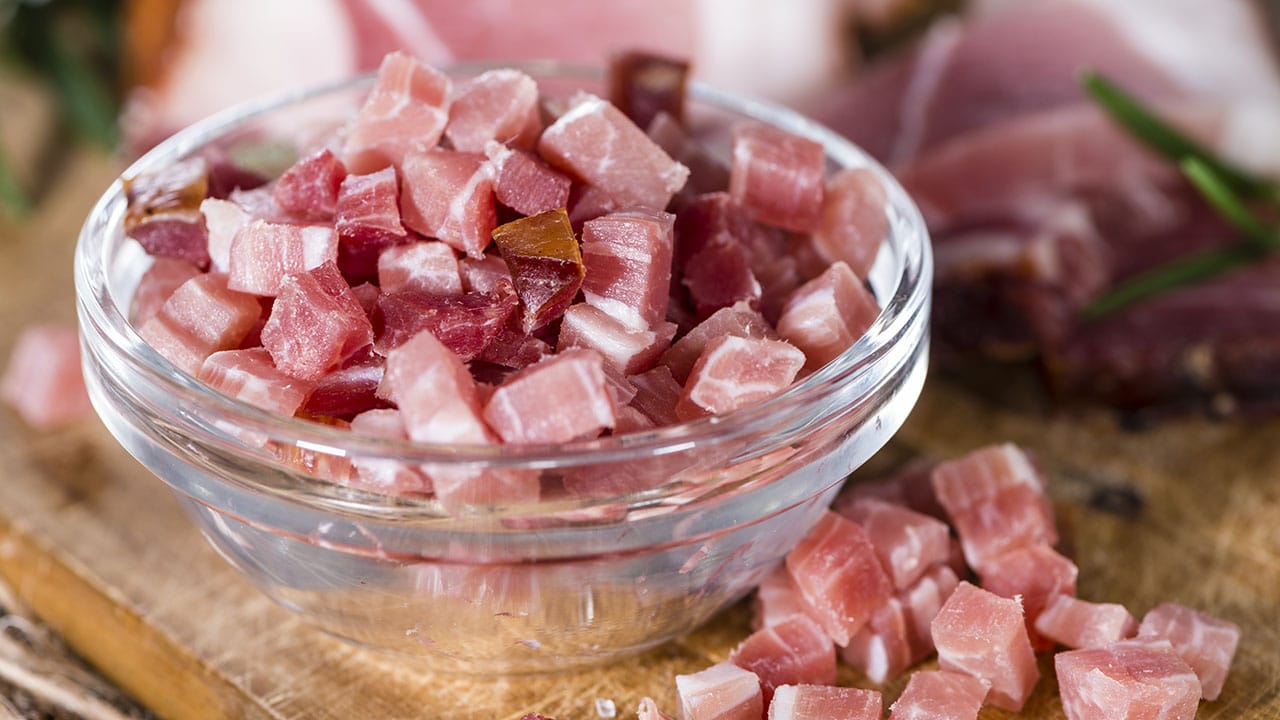 These French-derived pork belly bacon strips or cubes are cured in salt (not smoked) and offer an excellent boost of flavor to many cuisines and salads. Speck is traditionally referred to as pork fat layers and can be cooked or pickled, and eaten cured, smoked or raw.  Picture prosciutto, but with a delightful tinge of smoke and a little firmer texture. Speck is usually served as an appetizer.

This delicious, not lower-fat alternative to pork bacon, prepared from smoked turkey, is also a great alternative in religious circles where it’s forbidden to eat pork

Yes, it’s from a duck. Not everyone’s ready for this one; but for those who are and want something unique, juicy, and less fatty than pork bacon, these cured, very thick slices of duck breast are right where you want to be.

Coconut Bacon and other Vegan Bacons

One of the more prevalent alternatives to bacon for vegans is coconut bacon. It’s made from unsweetened corn flakes, tamari, or soy sauce, liquid smoke, paprika, and maple syrup.  When cooked, it results in a very similar texture, feel, and taste to bacon. Other vegan bacon alternatives are made with tempeh (a fermented soybean), shiitake mushrooms, seitan, or breadcrumbs.